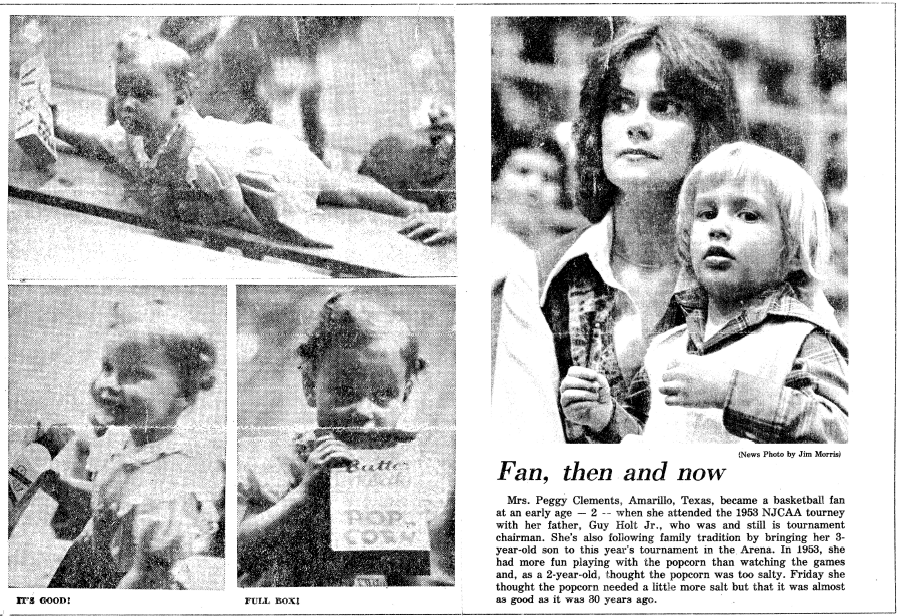 I am a basketball brat. I was born during the 1951 NJCAA Basketball Tournament in Hutchinson, Kansas.

Each childhood birthday celebration was at the National Tournament. I thought the town was throwing me a party! You see, my dad was the National Director of the Tournament from 1949-1989.  So when it is time for “March Madness”, I get a little whimsical. I can’t help myself.

Most of my life lessons were shaped by attitudes about winning, dignity, losing, strengths, talents, teamwork, honor, principals, humility, pride, hard work, effort and sportsmanship. But sometimes, the momentum of a championship game got to the most elegant of us.

During a close game between Moberly Missouri and Vincennes Indiana, my demure mother, a Hoosier, stood to her full 5’4” and shouted, “SIT DOWN, COTTON!!” It seems the Moberly Missouri Greyhounds coach, Cotton Fitzsimmons, was hollering at the ref, regarding a foul by a Vincennes Indiana Trailblazer.  At the director’s table, my dad swiveled his head so fast and shot her THE LOOK…….”We” did not tolerate poor sportsmanship in our family.

So last week, I saw an interview with former NBA great, Bill Walton, talking about his college coach at UCLA, John Wooden. “Coach” guided UCLA to ten national Championships. A man of that stature used his “Life List” to attain success. He said it was his most valuable possession, handed down to him by his father.

“1. Be True to Yourself, 2. Always Keep Moving, 3. Make Each Day Your Masterpiece, 4. Help Others, 5. Earned, not Entitled, 6. Drink Deeply from Good Books, Especially the Bible, 7. Make Friendship a Fine Art, 8. Build a Shelter against a Rainy Day, 9. Gratitude and 10. Character Matters.”

I started thinking, Dad and Mom didn’t hand me a written list, but there a list ingrained in me. Not surprisingly it is very similar to the list above. I have a Bucket List, as do many of my clients.  After all, isn’t that why we plan right here in the office?   But I am now conscious of my “Life List”.  It is not a “Wish List” of things to see and do.  My “Life List” is who I want to be.

By the way, my Dad, Guy E. Holt was inducted into the NJCAA Hall of Fame in 1985, the same year as Cotton Fitzsimmons.